What makes the painting a Caravaggio?

The scientific analyses show painting techniques known to be used by Caravaggio, of which the essential points are:

1. The Canvas: here we find the same type of canvas that the artist used for all of his paintings done during his first stay in Naples.

2. The ground: the dark brown ground that was used for our painting, in which we find large grains of calcium carbonate, is the same as that used by the artist after his stay in Rome; one finds this to be the case as of 1606-1607 in a number of paintings such as the David and Goliath in the Galleria Borghese in Rome. 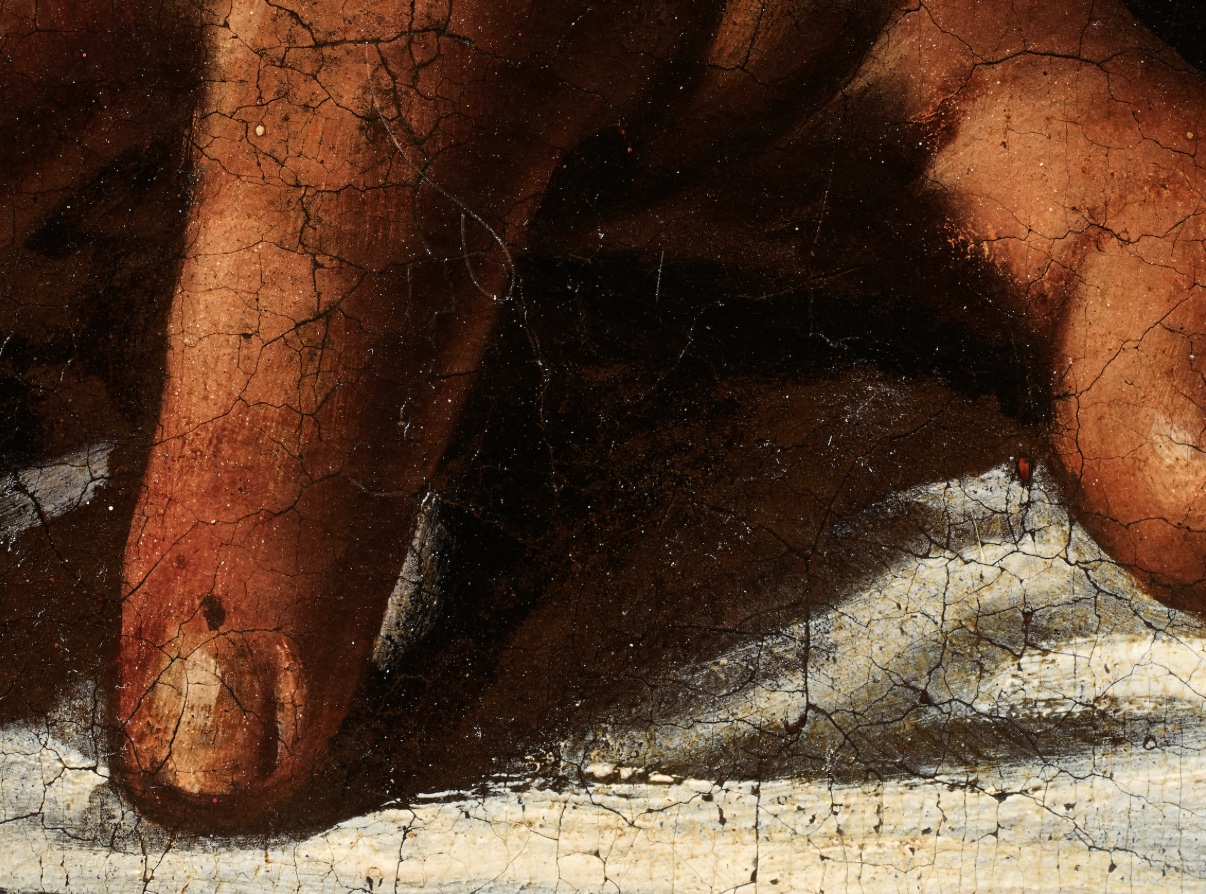 In this detail of Holofernes’ hand, the brown ground is left exposed in order to create the shadows, a technique called a risparmio.

3. The way in which the painting has been constructed:

a. The incised lines

Etched into the ground when it is more or less fresh, we find these lines to be quite long up until the end of his Roman period and shorter afterwards. These incised lines can be found in our painting in the hand of Judith, on her left eyebrow, on her forehead and in her hairline.

There is a slightly thicker line along the length of Holofernes’ right arm.

b. The black contour: this is clearly visible in the infrared photo.

Starting with a dark background, by dying the preparatory ground, which avoids the artist being blinded by the brightness of a white ground, Caravaggio constructs his composition by outlining the figures with a broad black brushstroke. This technique which seems specific to the artist is found in several of his paintings; the Crowning with Thorns in the Kunsthistoriches Museum in Vienna, the  Madonna and Child with Saint Anne at the Galleria Borghese; we find it in the Sainte Catherine of Alexandria in the Museo Nacional Thyssen-Bornemisza in Madrid, recently restored.

To the best of our knowledge this is the only artist who constructs his paintings in this manner. 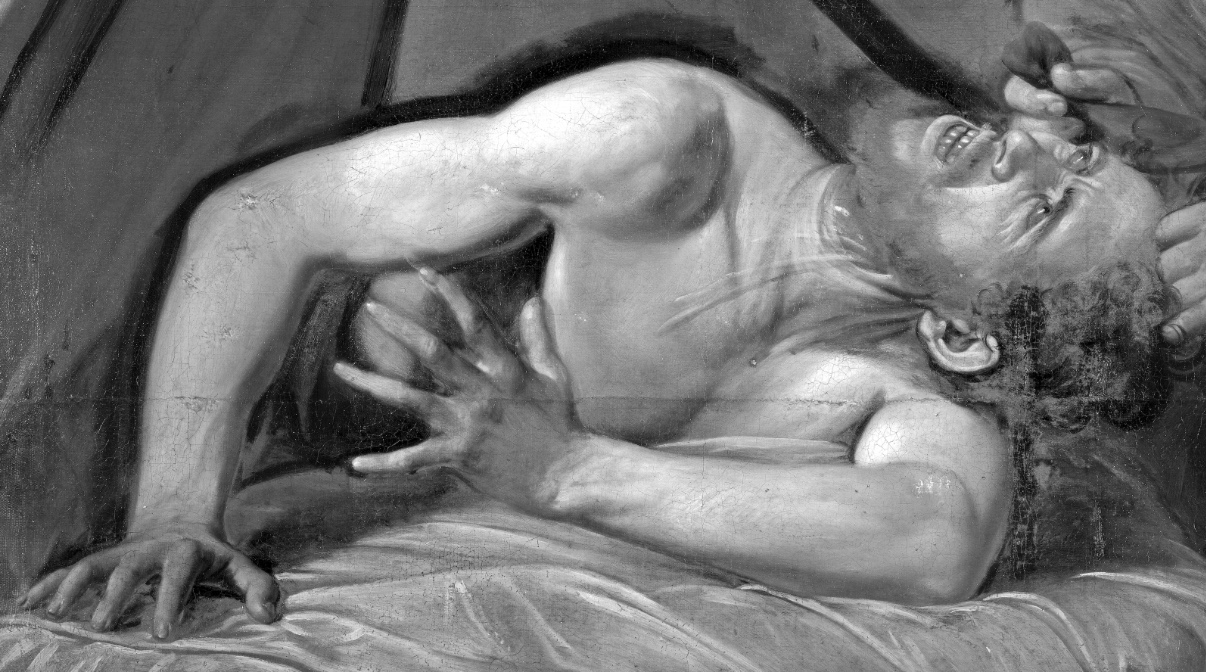 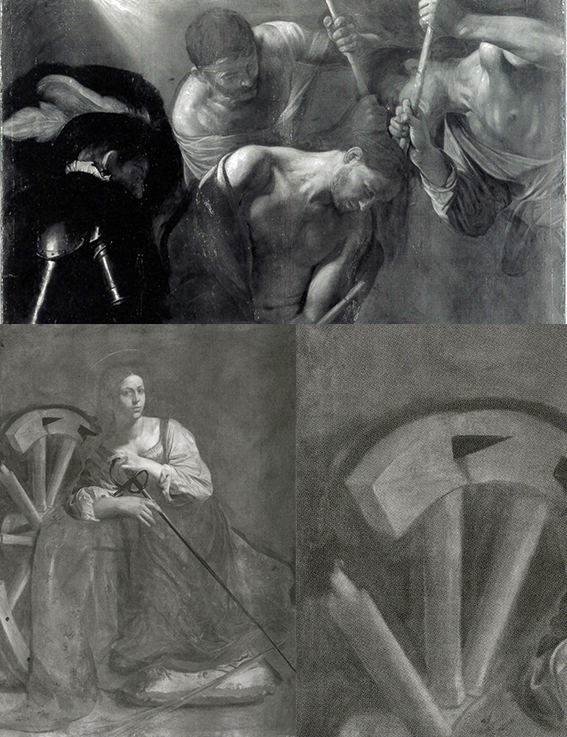 Above, Infrared Reflectography of the Crowning with Thorns (Vienna, Kunsthistoriches Museum)

Below, Infrared Reflectography of Saint Catherine of Alexandria (Madrid, Museo Nacional Thyssen-Bornemisza); detail of the wheel

We can see the same black contour that shows the way in which Caravaggio constructed his painting.

c.  The technique a risparmio : The use of the technique called a risparmio, developed by Caravaggio for the Contarelli chapel, allows the artist to exploit the dark ground as a halftone that creates a « passageway » between two forms.

Instead of building up the shadows, he leaves the dark ground uncovered, thus avoiding adding any superfluous matter. This technique is used by Caravaggio until his final paintings and is, in fact, even more present in works from his last years.

In our painting this technique is used for the shadows of the eyes, the nose and the chin of Judith, in the hand, beard and moustache of Holofernes and in the detail of the headdress of the old servant.

d.  The pentimenti : they testify to the hesitations and modifications to the composition done by the artist in the course of painting and reveal that this is an original work. They allows for the dismissal of the theory that this painting could be a copy.

They are numerous and visible either to the naked eye or with X-Rays.

The figure of Holofernes:

The index finger has been shortened 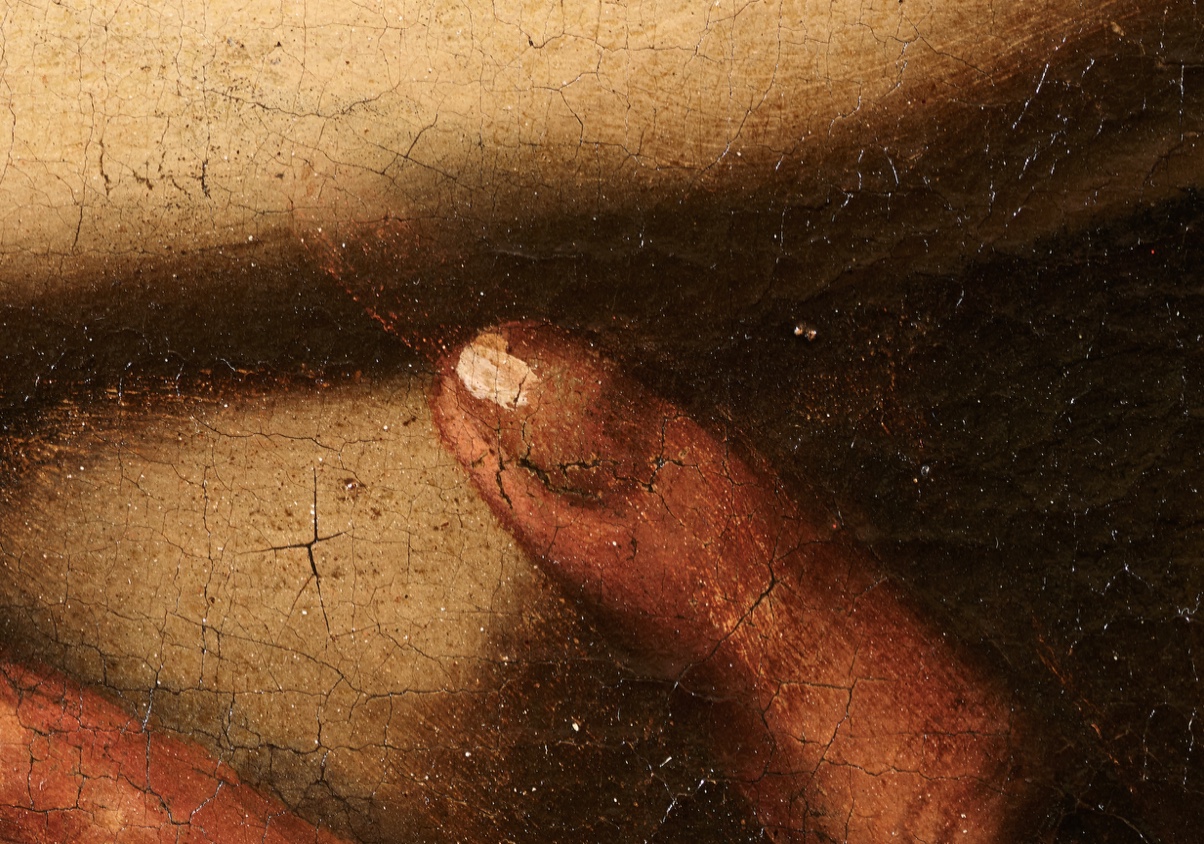 The little finger, which has also been slightly shortened 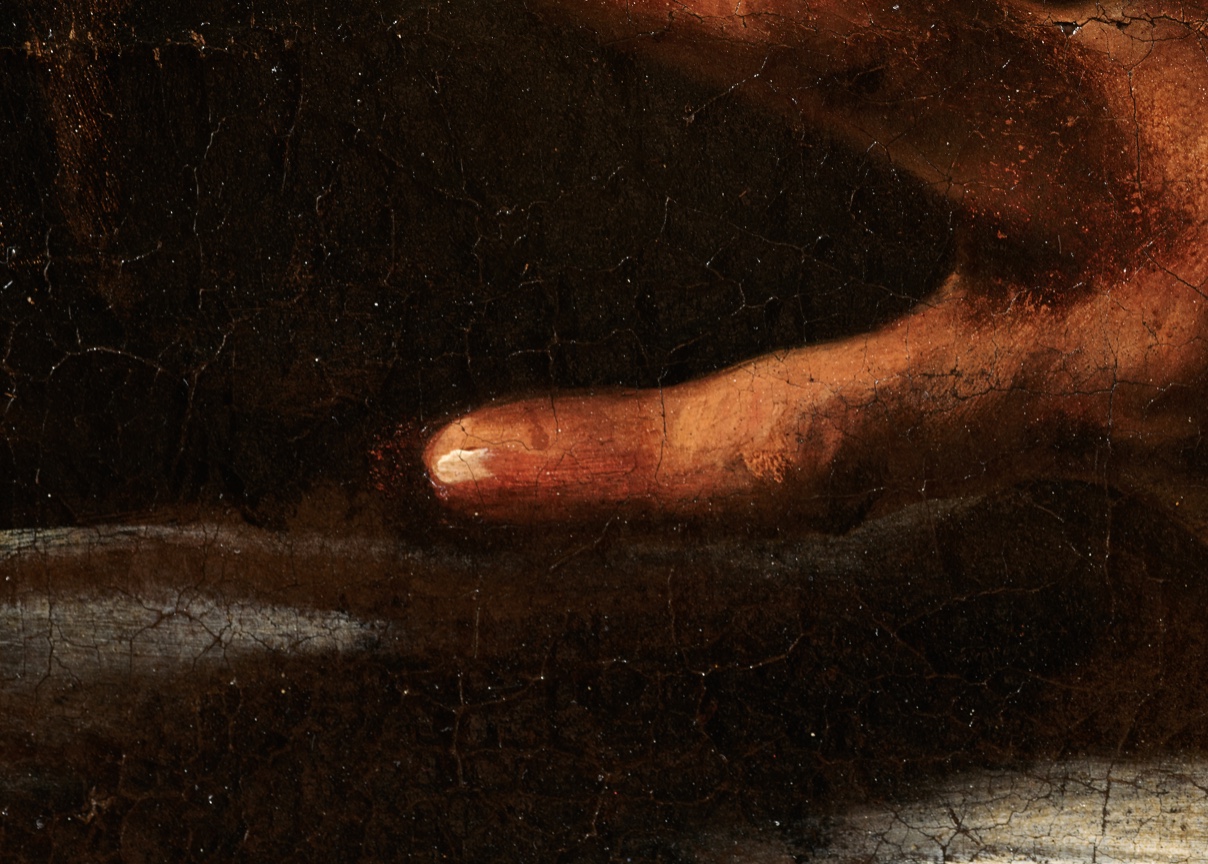 X-Radiography confirms what is visible to the naked eye but also shows a modification of the thumb which was originally larger and place farther to the right in the composition. After this adjustment, this first thumb is cleverly used again to create a sliver of light on the general’s right pectoral muscle.

We also find a brushstroke between the middle finger and the ring finger, the trace of the later repositioning of a finger. 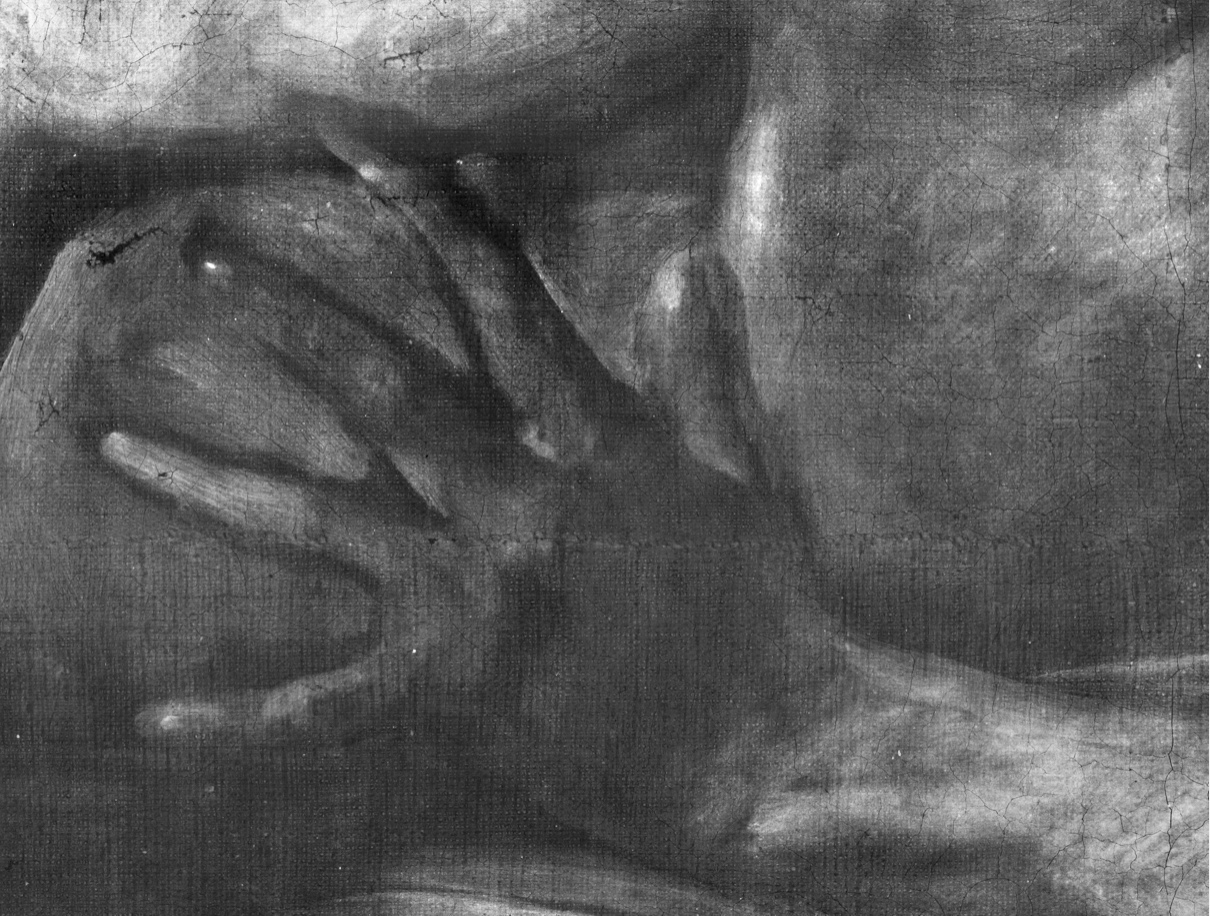 The figure of Abra:

The yellow line that appears under the white cloak shows two successive phases of execution: the artist first paints the servant’s yellow clothes and then, at a later moment, covers it by painting a white fabric. 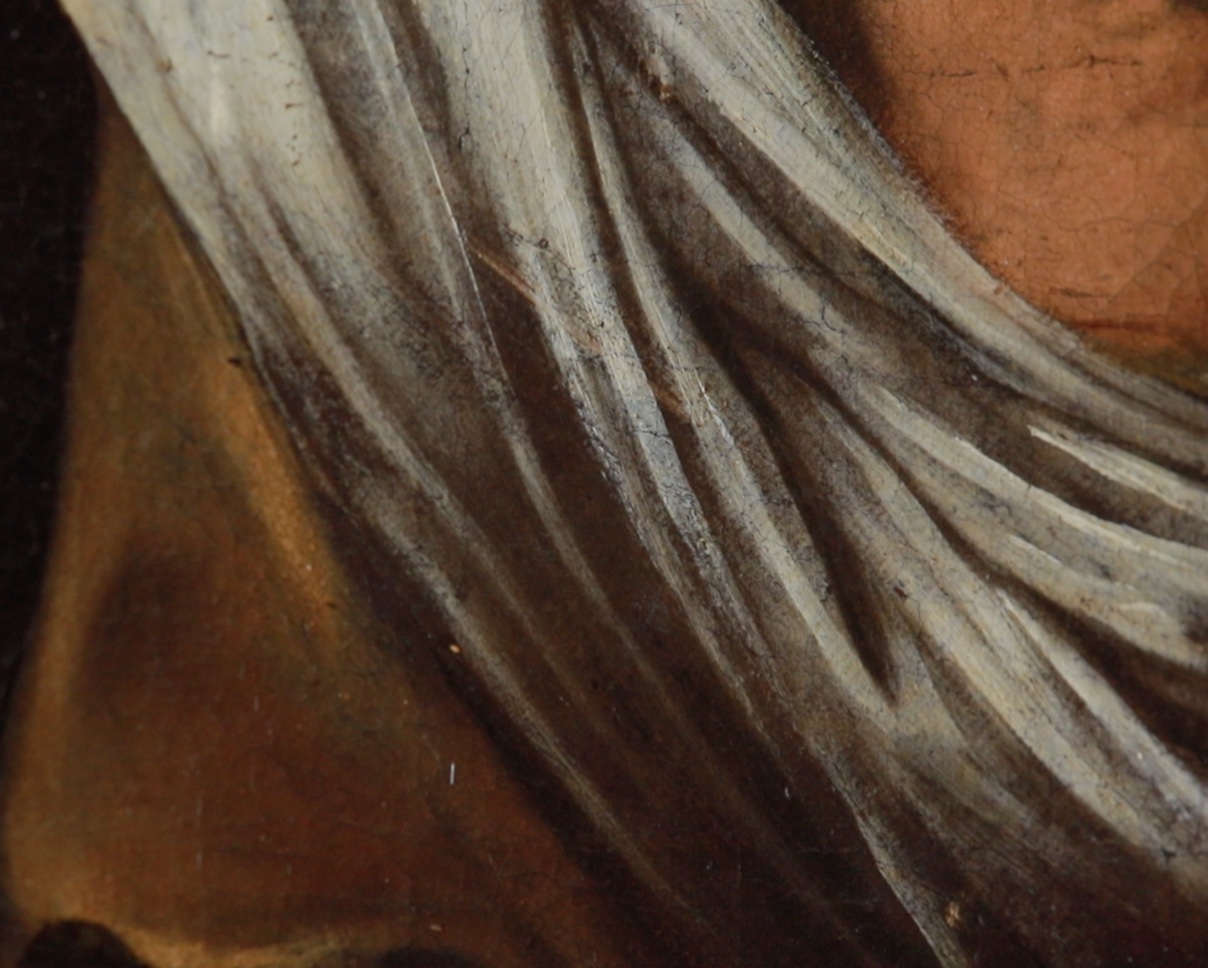 On Abra’s left hand we can make out red preparatory lines that lead one to believe that the hand must have been slightly different at first (one of the lines, for example, runs from the first phalanx of the ring finger to connect to the little finger). 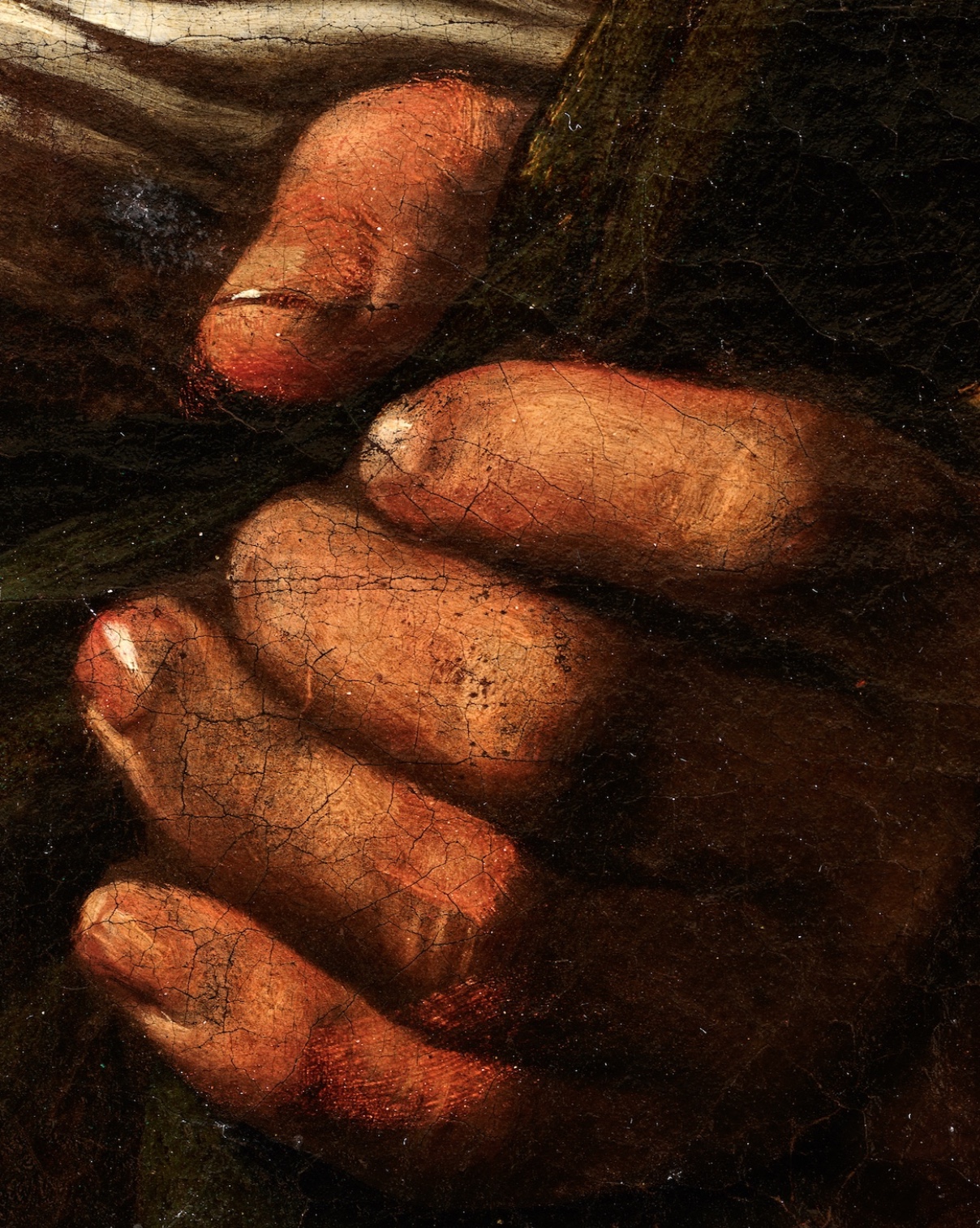 The X-Radiography reveals that initially Abra’s eyes were wide open, bulging, while the servant’s expression seeks to be more reassuring in the current composition. 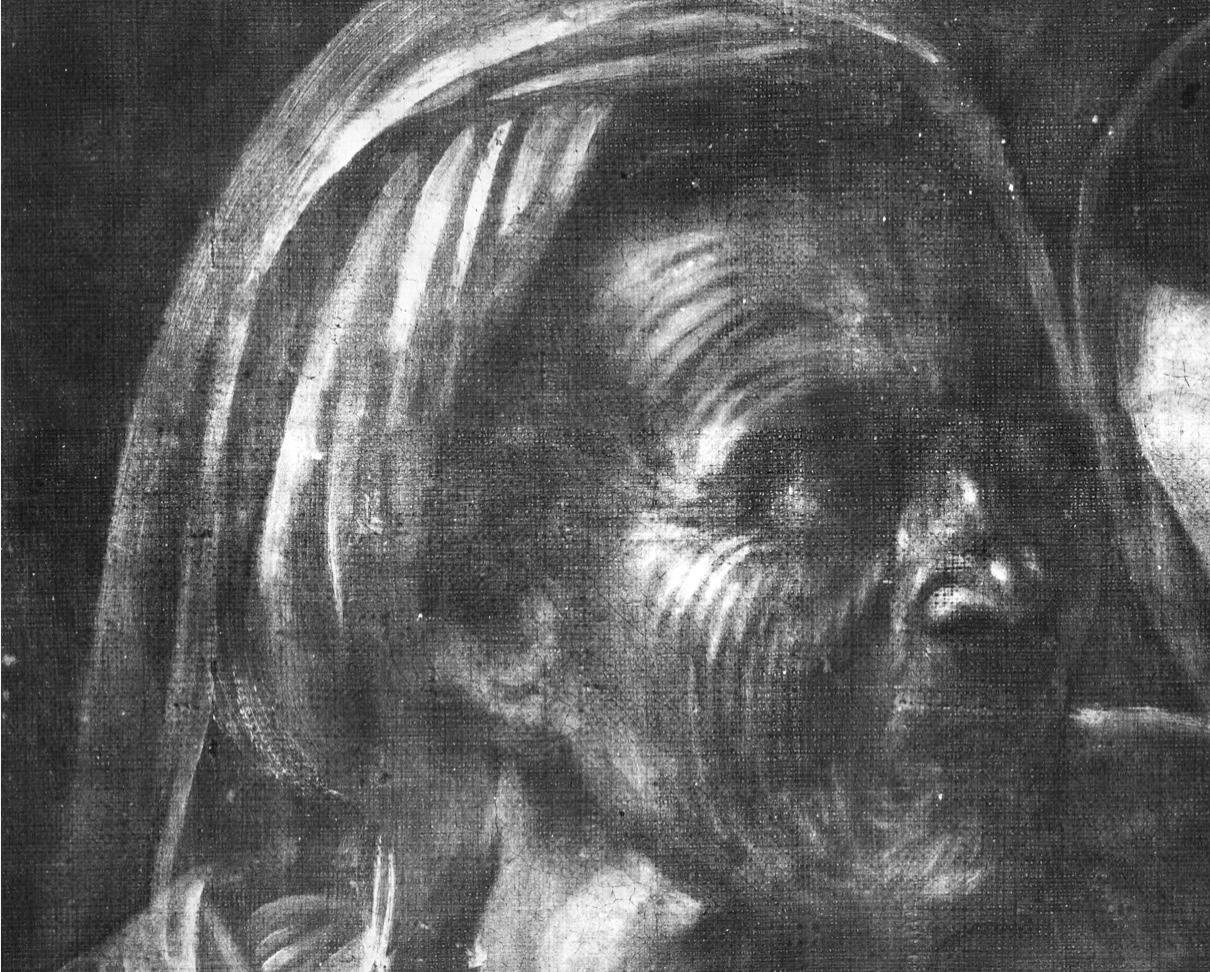 The change in direction of Judith’s gaze: the Reflectography shows that initially Judith was looking at the dying general, as in the canvas of the same subject in the Palazzo Barberini in Rome. It was only in a second phase that Caravaggio chose to direct Judith’s gaze towards the spectator. 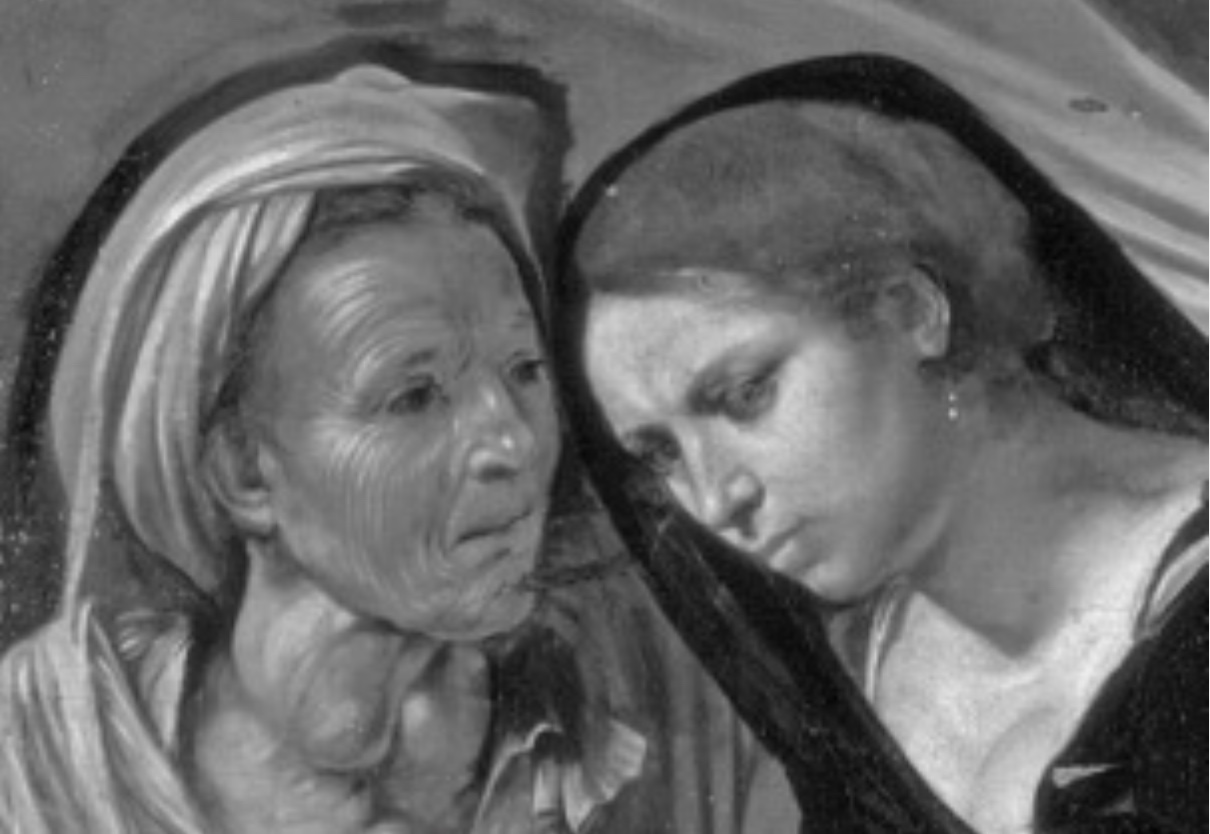 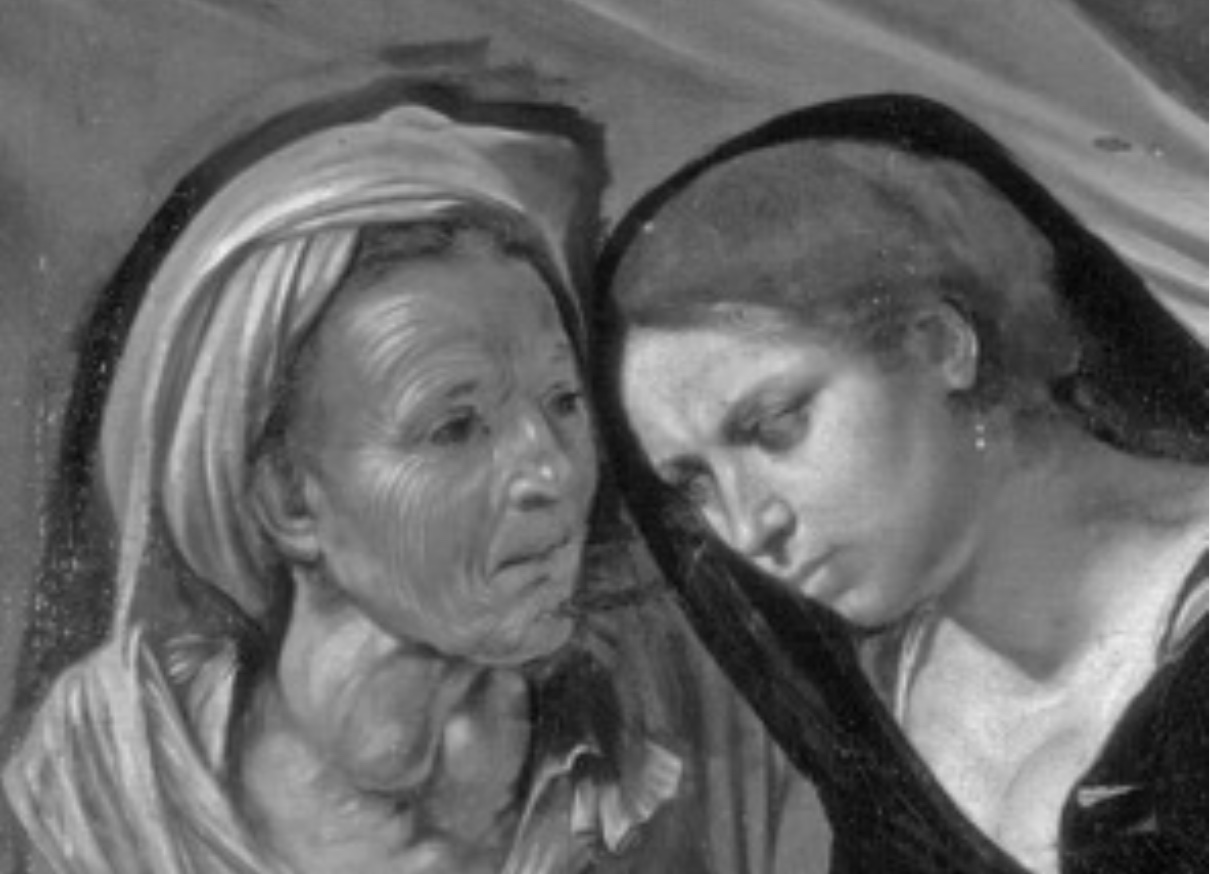 << From these elements we can conclude that the figures of Judith and Holofernes were both executed using a technique bearing all of the most important aspects of the way in which Caravaggio painted (the type of canvas and ground, the incised lines, the sketches, the drawing, the use of the ground a risparmio, the shadows, etc.). It would be strange to find such elements together in a painting that had not been painted by Caravaggio >>. (Rossella Vodret)